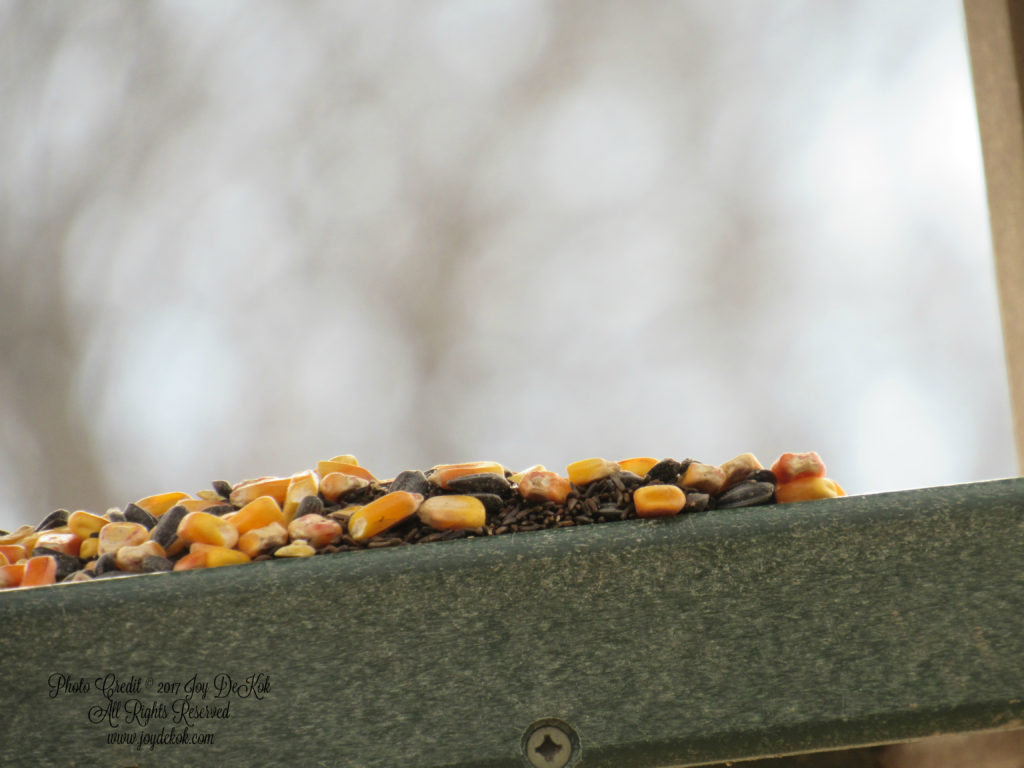 A few weeks ago, the wind blew the way it does in a summer storm except that it was February. My photo fort ended up in a tangle in the dogwood bush the birds like the best. And their favorite feeder landed on the path where the deer usually walk.

Since that day, the birds have been cautious and rarely come to the feeders when I’m out there even when I put their favorite treats out. They used to listen to my voice and come closer, but now when I talk to them, they flee. I hear their songs in the distance and pray they will come closer again. I miss our lovely encounters.

Today I went out, and my fort had again been shoved around by the wind. Not in a big way, but it wasn’t in the same place it was yesterday. Setting the fort back into its normal position was a little muddy.

For some reason, the damp dirt on my hands was all I could think about. While I wiped it off on my pants, a memory arrived.

I was around 6 years old and walking in our neighborhood, a kid called out, “Hi, Joy!” He sounded so nice, and I was feeling a little lonely, and I felt a smile move across my lips as I turned around and answered, “Hi!” I didn’t get his name out because my sort of open mouth was full of wet, gritty, dirt.  His mud ball had some hardness to it as if he’d fashioned it intentionally for the greatest impact. I know it was a mud ball and not just a well-flung mud glob because, on the step beside him, he had a few more lined up. I stood on the road stunned and crying. Semi-hard mud covered in sloppy wet mud hurts. So does the realization that his friendly greeting wasn’t friendly.

His mother saw what happened and got after me for crying. Then she made a shooing motion with her hands and told me to go home. That sort of ticked me off because it was as if I had a mud ball in my mouth just because I was there. I tried to walk and spit it all out and succeeded in getting the whole mess on my shirt. The one Mama had washed and ironed. And that was enough to make me cry more. Not because she’d be mad, but I just loved her so much and knew this would mean more work for her. When I saw the blood in the mud, I cried harder, and my shirt got messier.

It was one of those days.

Today, while waiting for the birds that never came, I remembered the details of that mud ball moment. The sound of the boy’s voice, the smirk on his face, and the sparkle in his eyes when he saw that he’d hit the mark. And the injustice of it all came back.

I was more than a little annoyed at my thoughts for surely after all these years, I was over that childish and unkind moment. Besides, I’m a Jesus follower now and a believer in forgiveness. And I’ll be sixty this year!

But the nagging sting was still there, and I had to ask myself, “Why does mud on my skin always make my stomach clench in that old sad, shameful, angry way? And why can I still taste the dirt, blood, and tears?”

I left the empty feeders for a walk in the sunshine and a talk with God.

“God, why does that old moment in my life still bother me? And the details – what’s up with me?”

My feet felt heavy, and my pace was slow. There was work to do in my heart, and although I wanted to get it over with, I also didn’t want to rush God. So, I took the long way to the house. The really long way.

I stopped on the path and thought to God, “What he did was really mean. And embarrassing. And wrong.”

The cool breeze blew across my anger-warmed cheeks.

That’s when the real business between God and me began. Flashes of the times I was mean to others spun through my memory.

I had mud on my hands.

God, in His infinite patience, helped me confess my own long ago meanness so I could grieve my actions and forgive a kid who is also almost sixty years old and whose name I no longer remember, but whose unkindness had lingered in my memory for far too long. And I prayed for God to bless a boy who had probably forgotten the episode by suppertime that night. A boy with a pitching arm worthy of the Minnesota Twins in a winning year.

Relief started to seep into my heart, but since the joy that usually engulfs me wasn’t happening, I kept walking.

After a while, I had a step-stopping thought and wondered out loud to God, “Is it possible that I’ve held on to this old hurt for so long because I’m hiding behind it? Have I been using it to avoid the need to confess old hurts I caused others way back then?”

I’d just hit the truth nail on the head.

At that moment, forgiven-driven relief flowed over my mud-caked heart and warm tears slipped down my now cool cheeks.

Suddenly, right in front of me, far from the feeders, but very near to me, a chickadee sang from a grapevine branch and drew nearer when I talked to him. The little bird had no idea he was a sweet blessing from God, but that’s sure how it felt to me.

And then there’s this tiny but powerful truth that crossed my mind as I turned the corner toward the house: if the birds had come to the feeders, I wouldn’t have taken this walk or pondered the muddy memory. And I’d have missed out on the blessings of receiving and giving forgiveness.