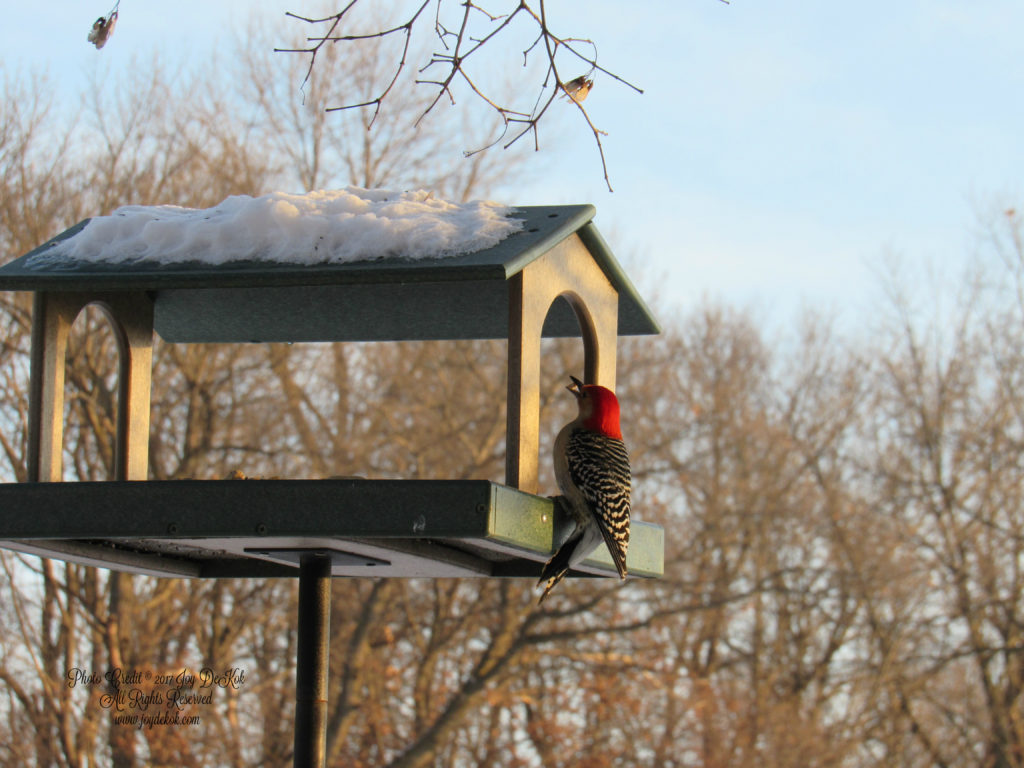 Many of you know that I find great pleasure in feeding, watching, and photographing the birds from my photo fort Jon bought me for my birthday. 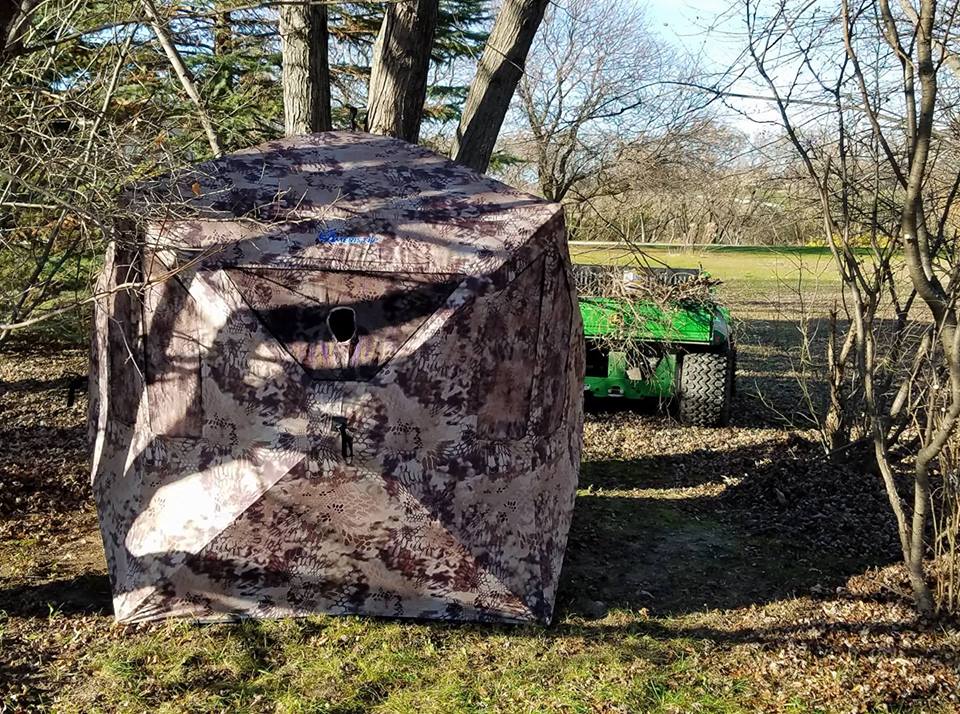 When this guy, the red-bellied woodpecker, first came to the feeders, he was vocal while he flew back and forth over my enclosure. I giggled from inside when his wing sometimes brushed the tent roof and walls.

Sometimes he flashed past my open window only inches from my face. I wondered if his aggressive behavior was meant to chase me away as it does his competition – the other birds –  because he flees from his enemies the hawk, bald eagle, and feral cats.

Instead of leaving, I sat as still as I could and waited with my camera poised. I knew if he landed, I’d have seconds to get a good picture of him.

We were both persistent.

At the start of us watching each other, the poor guy rarely took the time to eat. Even the vapor of my exhales on the cold Minnesota air were enough to send him flying away.

When he did land on a feeder, getting comfortable was a process.

The other day I had to stand outside the fort because it collapsed under the weight of an ice storm. 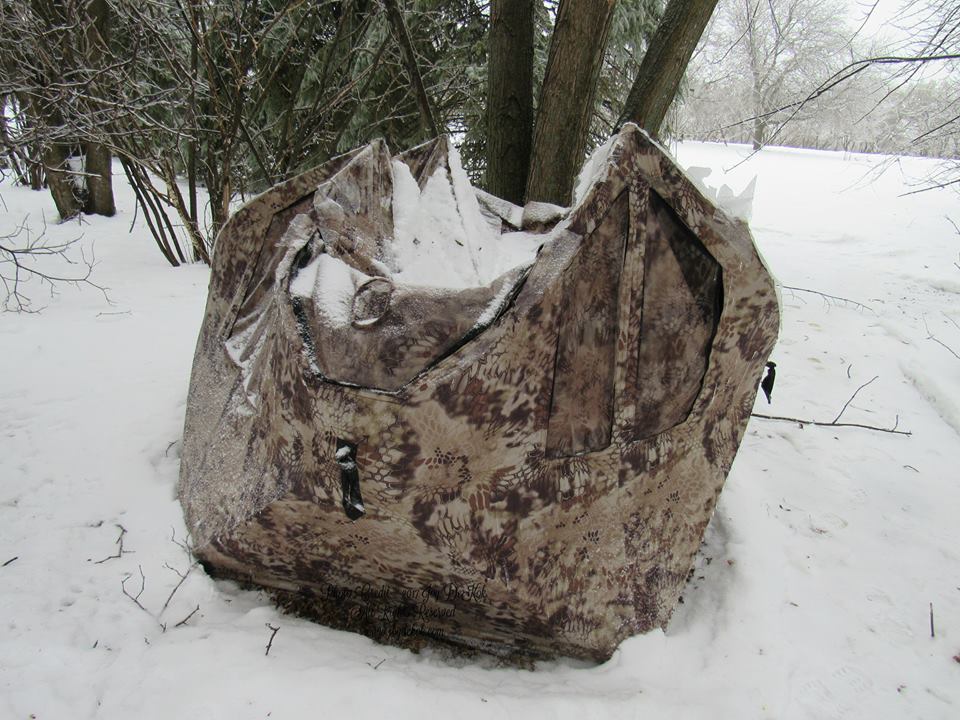 That’s when things changed between us.

He seemed to like me better when he could see me. He flew in and sat on the roof of the fort, but there was no swishing. No aggressive demands. His call was a softer version of “churr.” Excitement built up in my heart.

I wanted to move but didn’t want him to leave, so I kept my camera focused where it was when he landed; on a branch where the chickadees often sit.

After what seemed like a long time of standing still, I wanted to sigh really loud because I was frustrated that I wasn’t getting any shots of him. I stomped my internal foot. I was cold, and he was beautiful in that solid gold photo kind of way. I wanted pictures so I could savor memories of my moments with him later. Was that too much to ask?

Um. Yeah. I get that way sometimes.

Then the thing I didn’t expect happened. I heard a quiet, close, answering call and she came. To the branch I had the camera focused on. The beauty of the moment quieted my frustrated heart.

Sometimes waiting is so worth it!

She was in no hurry. He was quiet. Inside my layers of clothing, goosebumps danced up and down my arms.

Then she came closer and ate. He stayed put and watched me, but calmly. I realized I wasn’t as scary when he could see me.

They both stayed long. She ate, and he watched even when I had to reposition my body and camera. 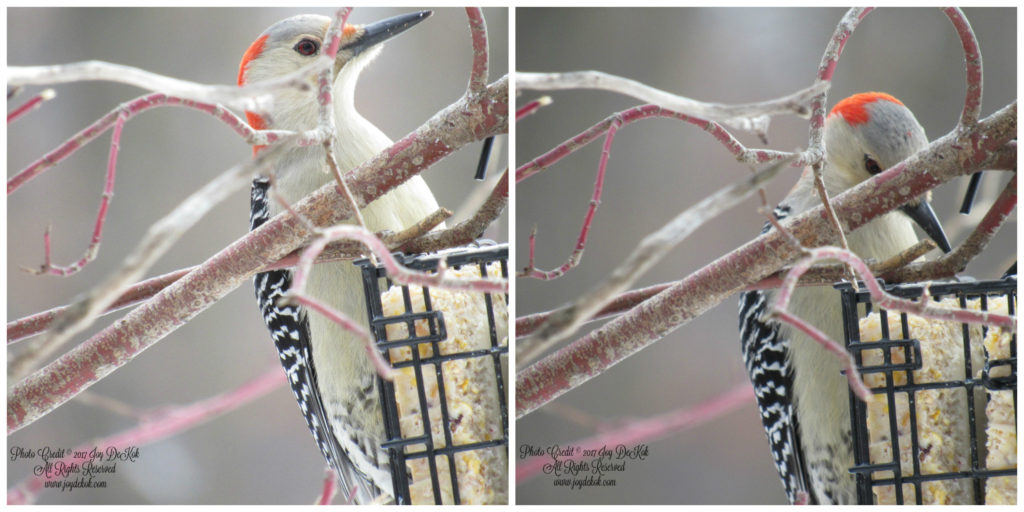 After a while, my hands were colder and stiffer from the wind blowing across the frozen wildflower field. And I felt like Mr. Red-bellied needed to eat in peace which might not happen if I stayed. 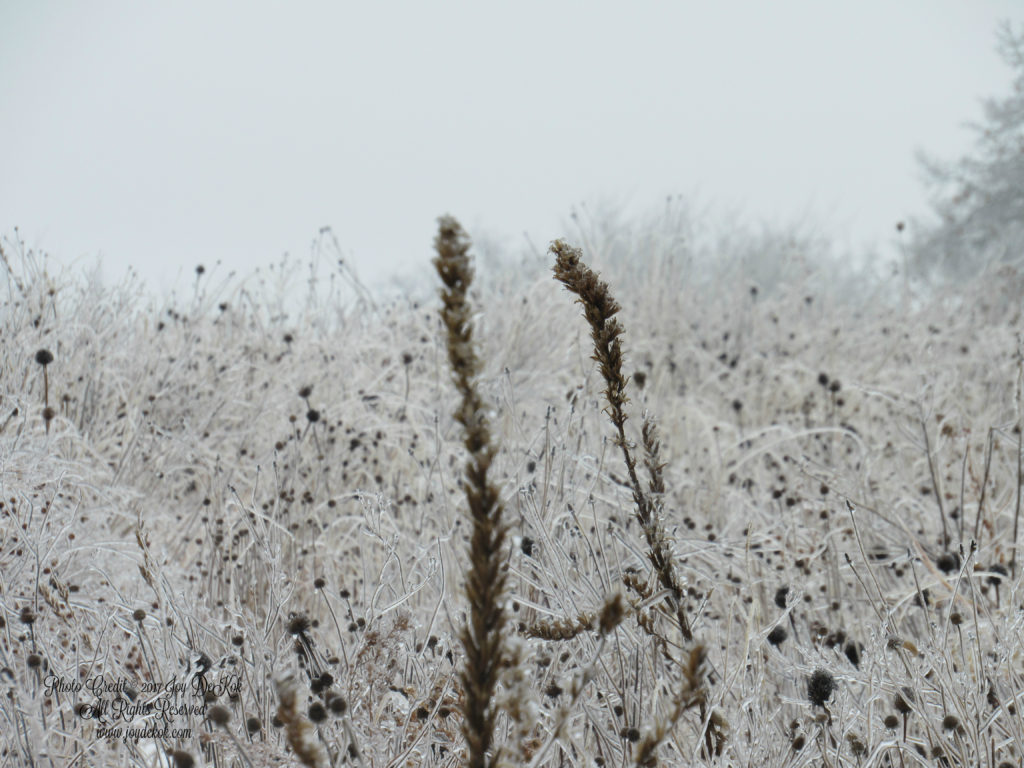 As I turned to go, I heard a flutter of wings and turned around in time to see him land on another suet feeder and dig in. Gladness stretched across my heart.

On my way back to the house, I thanked God for sending them to teach me more about their kind.

Just then, a silent question stopped me in my tracks. “What if it isn’t just about them?”

I no longer felt the wind on my cheeks or my cold and stinging fingers.

Not willing to ignore the thought, I wondered out loud, “What could it be about?”

Although I’ve dealt with a lot of my fears in recent years, one remained strong, and I refused to see because it wasn’t just scary, it terrified me.

Standing there, I heard myself say, “For crying out loud. Now? Here?”

There was no way to deny the answer. It was time to stop swishing by it trying to contain and control it. Then and there.

When I forced it out of into the open, a shiver rocked my body. It wasn’t because of the cold – I was numb by this time. The body shake came from what I saw in the snarly mess I’d been hiding in my heart:

I was afraid of losing the things (people and opportunities) I’d already lost.

Three things happened the second I acknowledged the truth:

Tears flowed. It was all so raw.  Sort of like when Mama died. It was time to grieve.

I stood still, perhaps in a bit of shock, and prayed, giving the whole tangled mess to God one strand at a time.

After a while, I realized I was soaked all the way through three layers of clothing. Freezing rain was falling again. It was time to go inside and wrap my now very cold fingers around a mug of hot coffee. 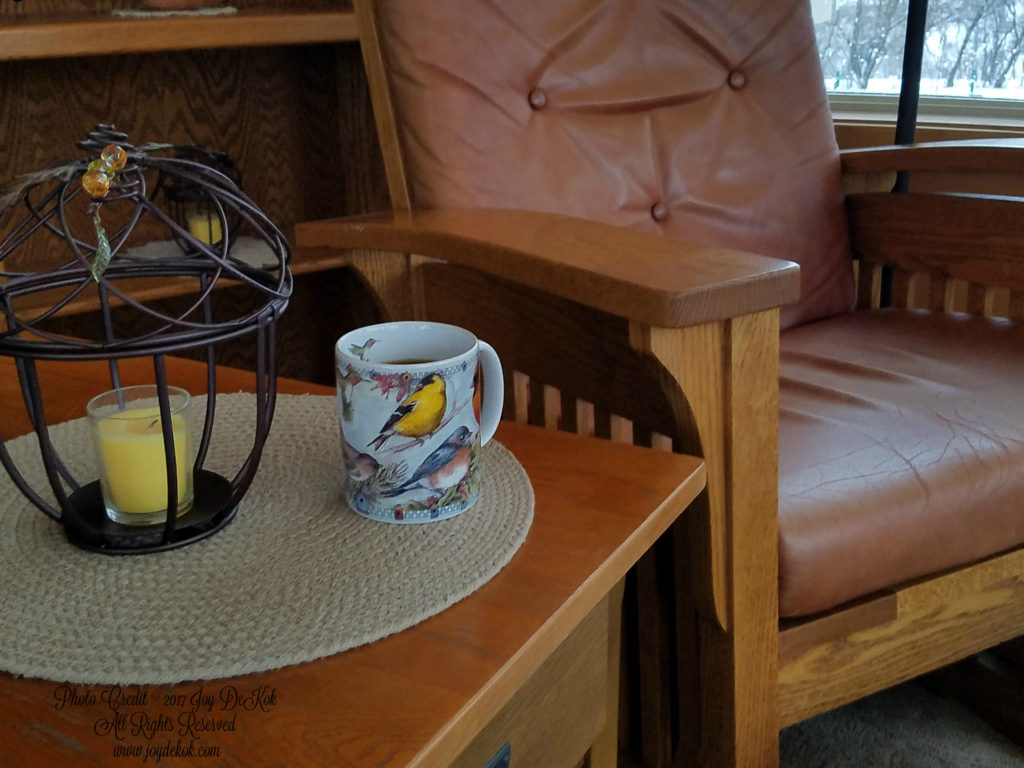 Sitting in the living room, I kept praying. It took two cups of coffee to get it all out.

And somehow, after a whispered amen, I rocked myself to sleep in our wooden rocker, worn out but at peace. The kind Jesus talked about just before He left for Heaven.

“Peace I leave with you; my peace I give to you. Not as the world gives do I give to you. Let not your hearts be troubled, neither let them be afraid.” John 14:27 (ESV)

I know fear is going to return from time to time – it’s a tenacious enemy. And I’ve let it in so often, it’s almost a comfortable enemy.

It’s been a few days since this happened, and the pain lingers because that’s the way it is sometimes, but I’m no longer afraid I’m going to lose what I’ve already lost. And I know that’s Him healing me along the way.

A sweet red-bellied note: The other red-bellied males that come continue to call me out and swish by the window. But these two are no longer afraid. 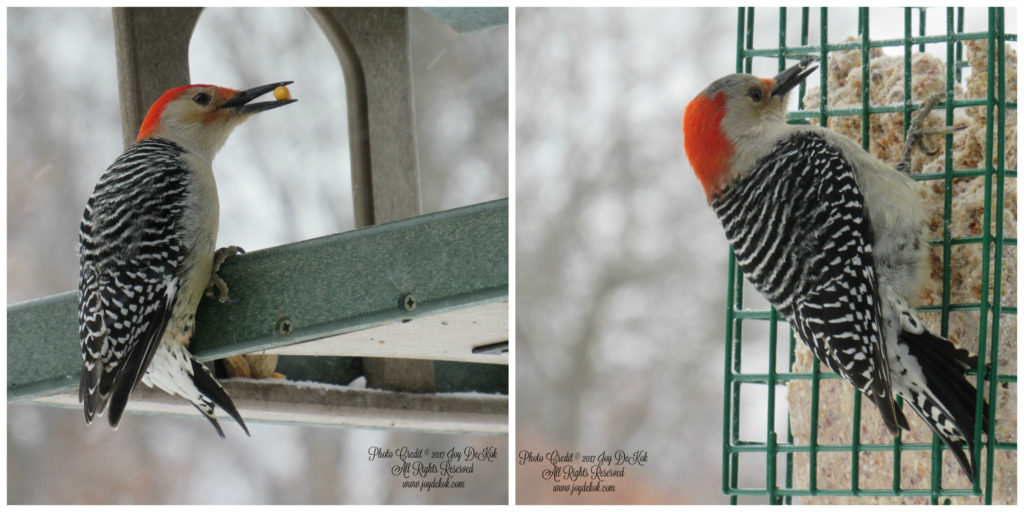 A cool red-bellied woodpecker fact: Imagine my surprise when I saw the female’s tongue reach out while she was eating. Their tongues can reach out almost 2 inches past their beaks, and they are sticky so they can catch their favorite snacks.

If you’d like to read other bird devotionals, I invite you to check out Under His Wings. Just click on the cover below. 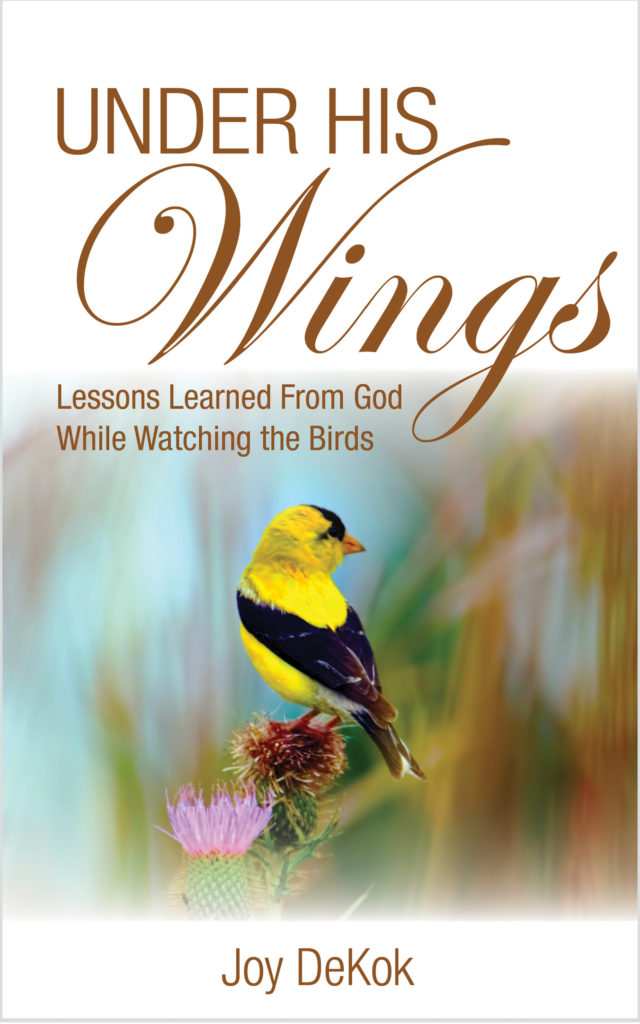 Tears flowed. It was all so raw. Red-bellied #fear #Devotional

Tweet This
A silent question stopped me in my tracks. “What if it isn’t just about them?” #Fear #devotional