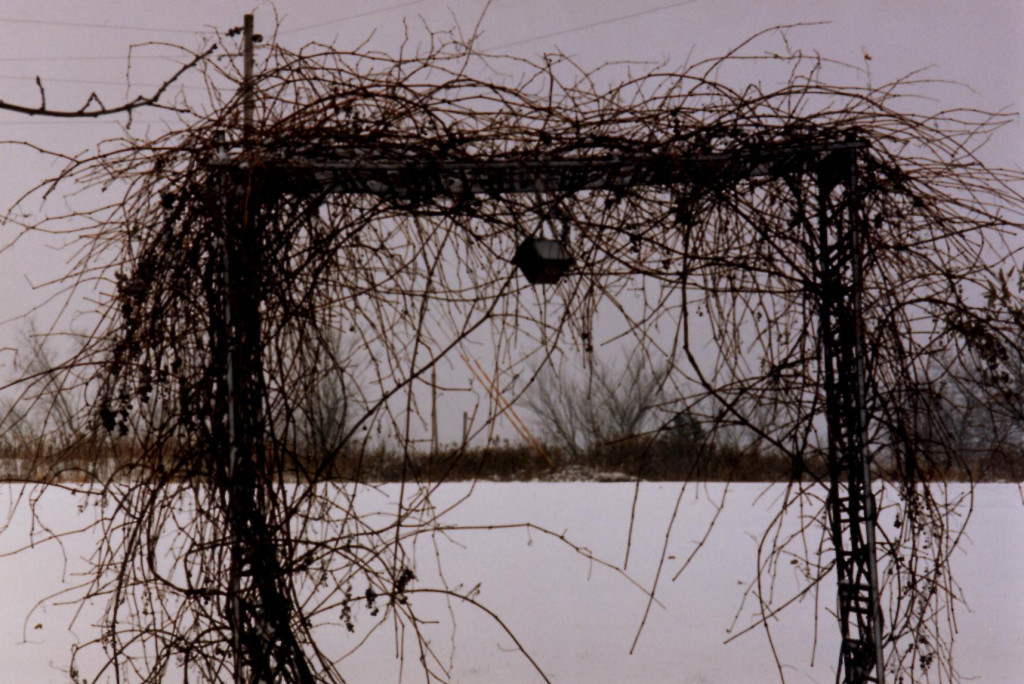 The wren house in winter.

One spring morning a wren fluttered around me at the bird feeders. “What do you want, little fellow?” I asked the persistent visitor. He flew back and forth, singing. I followed him to the wren house nestled into the grapevines growing up the arbor.

He waited for me on top of the house. Nothing in his actions showed fear or a need for help. He cocked his head and listened. The female joined him. From inside came the sounds of tiny baby wrens. I was hearing their first songs. Soon, Mama returned to the little ones, and Papa went in search of food.

Leaving their house in the vines, I smiled. The wrens seemed to be celebrating the birth of their babies. Could it be? Later that day they chased me away from their little house. Walking away, I felt little doubt about their earlier intentions—they had wanted to tell someone their good news.

Good news is worth singing about. God sent out announcements about the birth of Jesus centuries before His arrival and recorded them in the book of Isaiah. In time, He sent angels to tell others about the coming of His Son. The first angel came to a young virgin girl named Mary to announce His arrival into her womb, and later to her fiancé Joseph to reassure him that his bride-to-be had done nothing wrong. Nine months later, the angels brought the news to the shepherds.

Then God placed a bright star to lead the watching wise men to the Child, so they, too, could look upon the Savior who had been sent into the world.

God recorded several re-birth announcements in His Word reminding us of those who believed in Christ before us; the twelve disciples who later proclaimed His message to thousands, the broken woman He met at the well, the thief on the cross next to Him, and the man renamed Paul who met Him on the road to Damascus, are just a few.

God continues to announce how essential the birth of Jesus is, and as always extends the invitation to all who hear it, to believe and be saved—have you responded to yours yet?

“In the same way, I tell you, there is rejoicing in the presence of the angels of God over one sinner who repents.” (Luke 15:10)

“For it is by grace you have been saved, through faith—and this is not from yourselves, it is the gift of God— not by works, so that no one can boast.” (Ephesians 2:8-9)

A birdhouse box that has a 4” x 4” base with an entrance that is 7” up from the bottom of the nest will serve many species of birds. Chickadees and wrens will use a house with a 11⁄8” entrance. Nuthatches and downy woodpeckers need an opening that is 13⁄8”. The tufted titmouse will nest in a box that has a 11⁄4” entrance. If you are trying to attract chickadees, nuthatches, or downy woodpeckers, line the houses with untreated wood chips or leave little piles of them around the area for the birds to find for themselves.

If you’d like to read another sample of (or purchase a copy) Under His Wings – Lessons Learned From God While Watching the Birds, click on the book cover below. 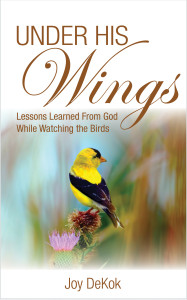 He waited for me on top of the house. #UnderHisWings #Devotional #Excerpt

Tweet This
Good news is worth singing about. #UnderHisWings #Devotional #GoodNews

Tweet This
I was hearing their first songs. #UnderHisWings #Devotional #BabyWrens

« Inspired By Them
In the Valley of Brokenness {A Legacy Post} »