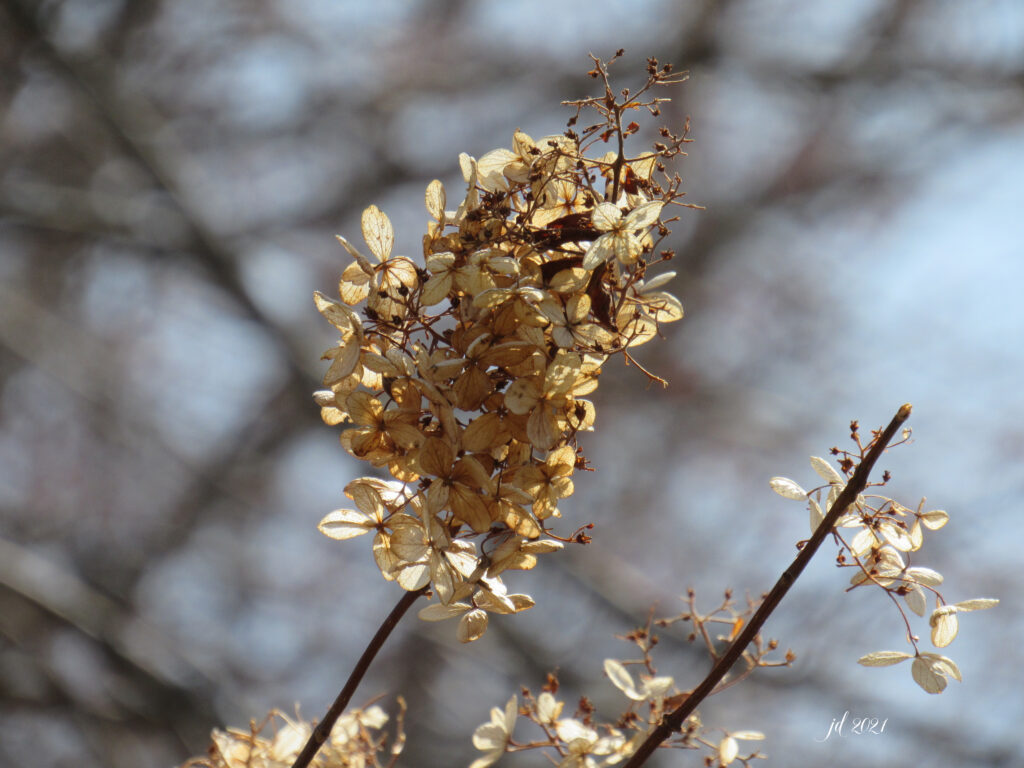 A Pause in the Wind ~ A Nature Essay by Joy DeKok

The other day was windy, with gusts of up to 40 MPH recorded. I still went outside with my camera, hoping to get a couple of miles walked and a photo or two.

Some things weighed heavy on my heart that day. Walking and talking to God is medicine for my spirit.

I’d been out there for an hour or more when sunshine on the hydrangea bush in our yard drew me to it. The angle was wrong (into the sun), and last year’s fragile blossoms were at the will of the wind. I stood still with my camera focused on the one that caught my eye, just in case.

I had to plant my feet firmly so the wind couldn’t shove me around. I considered giving up and moving on. There might be better opportunities behind the trees that form a windbreak. Instead, I stayed put waiting and praying for one good shot.

Then it happened. The wind stopped. In the sudden silence, I had time to snap this photo and a couple of others.

Moments later, I heard the wind coming across the wildflower fields. It hit the bush and me with the same intensity as before.

I know the wind ebbs and flows – it’s a scientific fact. But to the poet in me, it was like it inhaled, paused, and exhaled.

In Job 28:25, it says that God decides how hard the winds blow. And Psalm 135:7 says He brings the wind out of His storehouses. He’s in charge of when, where, and how hard it blows. These are facts, too – written to us by the God of Creation and science.

You might be wondering if I think God was distracted and looked away from all the sorrow and chaos in the world so I could take a picture of last year’s hydrangea blossom. I don’t know why He paused the wind in those moments, but I do know He is all-powerful. All-knowing. Omnipotent and omnipresent. I also know His eyes remained focused on everyone everywhere else when the wind in our yard paused.

Now it’s possible if we were having coffee, you might want to ask if I honestly believe this moment was an answer to prayer. That would be silly, right? Why would He do that? After all, I’ve asked Him for great answers to prayer, and I haven’t received the answers I long for, so really? A pause in the wind so I could take a picture?

Why? Perhaps He wanted to teach me that when I wonder if He’s listening, He is.  Maybe He let me get this photo as an illustration of that lesson. It is also possible He has more lessons for me wrapped in these moments that I haven’t discovered yet.

Here are three other God ponderings that wandered through my mind as I wrote this:  Was there someone else somewhere else who prayed for that pause in the wind too? Did the wind behind the pause catch up with the wind ahead, filling in that momentary windless space? Did it delight God when what He did took my breath away?

Not all my God questions have answers. That’s the wonder and mystery of God. For a woman with many questions who wants answers to them, there is peace in my spirit knowing He knows all there is to know, and that is enough—more than enough.