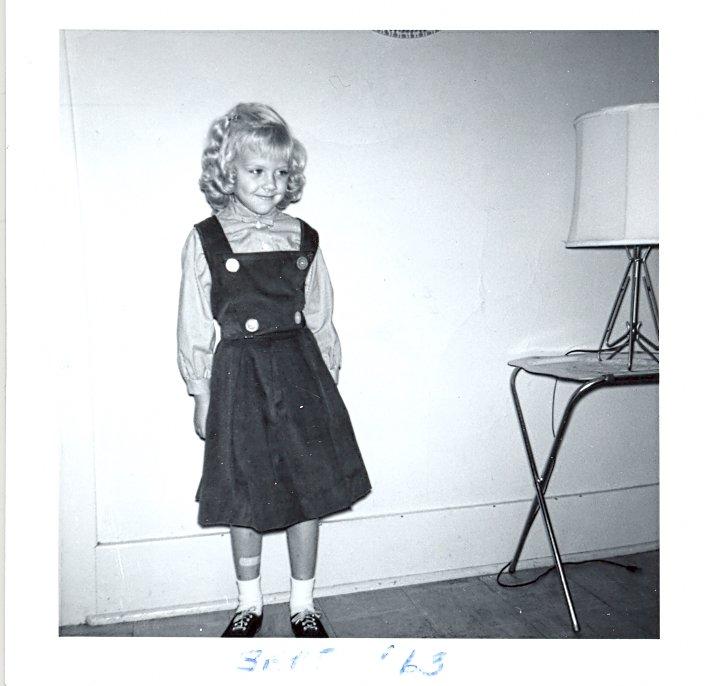 (This is me in Sept 1963. The jumper was dark green cordouroy and the blouse had the same green striped on white. The curls are the courtsey of my pink sponge rollers. The band-aid could have been from any number of activities – I did everything fast and with enthusiasm – band-aids were a normal part of my life.)

I thought school was the greatest social club every invented. I’d get to wear nice clothes, play with my friends, and do my other favorite things: read and write.

Kindergarten was great. We played, we snacked, had show and tell, colored, and went home. I loved it.

I should have known first grade was going to be a challenge the day I met Teacher. Mom took me in and the lady behind the desk asked me some questions about how far I could count (to 100), what words I could read (more than she expected), and what my favorite color was (lavender). Things got a little tense when she asked me how many colors I had in my box. My delighted answer: 64. Her eyebrows raised, she clicked her tongue, and shook her head at me, and suggested I stick to 8. My mother’s hand pressed gently on my shoulder – her way of gently asking me to be quiet. But in my heart I said, “Eight? Are you kidding? Why?”

I shut out the rest of the interview as Mama and Teacher did all the talking.

On the way home, Mama suggested I keep my reading and writing skills quiet until after Teacher had taught them. I agreed and then because it made no sense to me, I forgot.

And in the excitement of new shoes, a couple of new dresses, school supplies (it was some comfort that those 8 new colors smelled great), a book bag, and school lunch I hoped that we’d misunderstood Teacher and that she was only kidding.

It could happen right? Well, okay – not so much.

One day I arrived at school feeling especially full of life. My desk started out in it’s normal place in the row, but in the course of the day traveled to beside Teacher’s desk, the corner, and the coat hall. I finally ended up sitting on the cold floor in the hallway. I was told loud whispers, writing on the wall, and singing out loud in the coat hall were not acceptable behaviors.

It only took me a second to notice the other kids in the hallway. Three of them. Just the right number for a quick game of tag. Things were going well, until the other kids (who were far more experienced at hall sitting than I was) returned at top speed to their doors.

Before I could ask them why, a large, but gentle hand rested on shoulder. My principal asked me what I was doing. I turned to him as if announcing great news and said, “We were playing tag!”

Okay – so that wasn’t acceptable either. While waiting for my mom to come and have a talk with Mr. Carlson and me, I watched Teacher explain the behavior he’d missed. She shook her finger at me as she passed and the secretary ushered me into the glass walled office. I asked if he was going to spank me, (they could do that in the way olden days) and I watched amazed as he tried very hard not to smile at me. His eyes danced with the same kind of mischief I felt coursing through my veins.

He said,”No, I’ll leave that to your parents.”

Mom came in and I admitted to my various escapades and was told they would be dealt with when I got home. Back in the classroom, I found my desk in a new position: Up front by the chalkboard. I watched carefully as Teacher wrote the numbers 1 – 10 on the board. Then, she pointed to each number and said, “One, two, TREE. . .” I had no idea I was going to laugh out loud until I heard myself. Her dentures didn’t fit well and her “th’s” came out as “ts.” I thought it was the funniest thing I’d ever heard.

I was appropriately punished at home and gave my solemn promise to be a good girl. The sad part was my reputation had been established and if someone else whispered loudly, Teacher often assumed it was me. It got so bad, Daddy had to come to school and talk to her about it. So did Mr. Carlson. Although she blamed me for a lot of things I didn’t do, I still did plenty, but the difference was, I was willing to “own up” to my actions. Mama was teaching me that telling the truth was very important for good girls and I was working very hard on my “good degree.”

Except on those days when mischief ran in my veins. Then, I’d carefully weigh the pros and cons of being naughty: if I do this, this will happen. Often, I decided the punishment was worth it.

On the last day of school, Teacher hugged and kissed me and told me, “I’m retiring because of you. I will never teach again. Your second grade teacher has been warned about you. I hope she has a better year than I did. I love you.”

I cried the whole way home.

I worked hard on being good that summer. But her words had bruised my spirit. Learning that had once been easy,was immediately hindered as if a metal door had been slammed shut in my brain. Being a good girl (defined by sitting still at all times – which meant no twirling or dancing – and being quiet) took a lot of energy as I struggled to be who I wasn’t.

Over time, I started to get over it. I laughed out loud. Daydreamed about love. Talked on the phone. Sang my favorite songs with my friends on way home from school with wild abandon. Drew flowers. Loved cursive handwriting. And I could immerse myself in words all day by reading those of others and writing down my ow

I ran into Teacher when I was sixteen and working in the women’s department of our Tempo store. I was so glad to see her and I hoped she’d see that in spite of that day, I’d become a really good girl. I assumed she’d forgiven me in the tens years since I’d seen her, I told her who I was. She immediately made it clear she still blamed me for ending her teaching career. I said I was sorry again, and thanked her for giving me so many chances because I saw her actions on that very good oh so very awful bad day as gracious. She shook her finger at me, clicked her tongue again and said, “Be good!” Then she refused to let me help her find what she was looking for, and left the store.

I stepped away from her shaking in my sorrow.

I cried as I drove myself home that night as my old enemies Blame and Shame stepped back into my heart.

The metal door that had started to re-open, slammed shut again, and I barely passed my tests the next day although I’d studied hard and knew the answers.

Would I ever be good enough?

I’d just become a born-again Christian. The experience of His saving grace and forgiveness were awesome. I hoped she’d forgive me, but I learned later that she never did.

That’s the most important lesson I learned from Teacher; forgiveness is a choice and it matters and it equals an internal freedom we all long for.  Without hers, the ache was big.

That night after work, my mom asked me if I was angry at my teacher. I wasn’t – just hurt. My wise parent said, “Pray for her.” And I did. Over time, I realized I needed to forgive her for her unforgiveness. That part was so easy. Because I really did love her. The terrible ache became a sting. These days the memory  causes a pinch in my heart because I’m sad that we never reached that mutual place of forgiveness for both our sakes.

You might think I regret not being a better girl in the first grade, but I don’t. I had life lessons to learn and although I wish some of them had come to me in a kinder, way, I’m grateful they came.

Tweet This
Without her forgiveness the ache was terrible big. #Forgiveness #Unforgiven #Regret #Blame&Shame

Tweet This
I was working very hard on my “good degree.” #firstgrade #Blame&Shame #Forgiveness