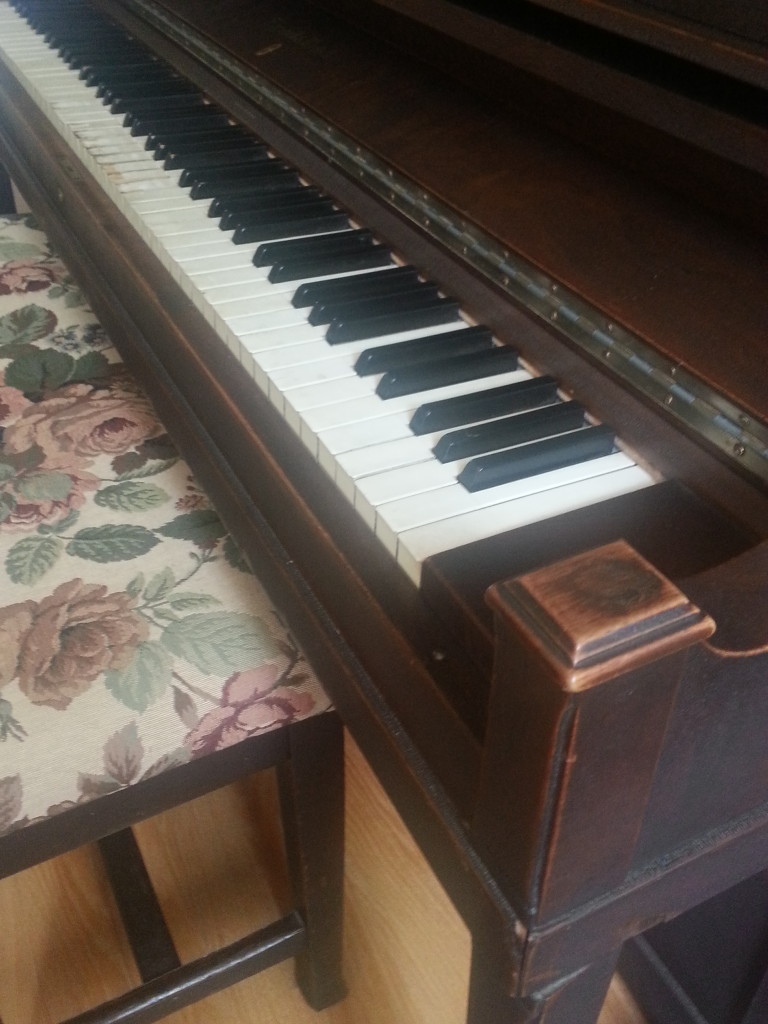 As a kid, playing the piano was like math for me. I didn’t get it. At all. And practicing scales ranked up there with subtraction and division flash cards, and was almost as bad as getting a tooth pulled. (We went to an old-fashioned dentist – going to him was dreadful!)

It’s not that I don’t like music – I love it. When someone else makes it happen. I didn’t get the music gene God placed in Grandma Joy and Mama. 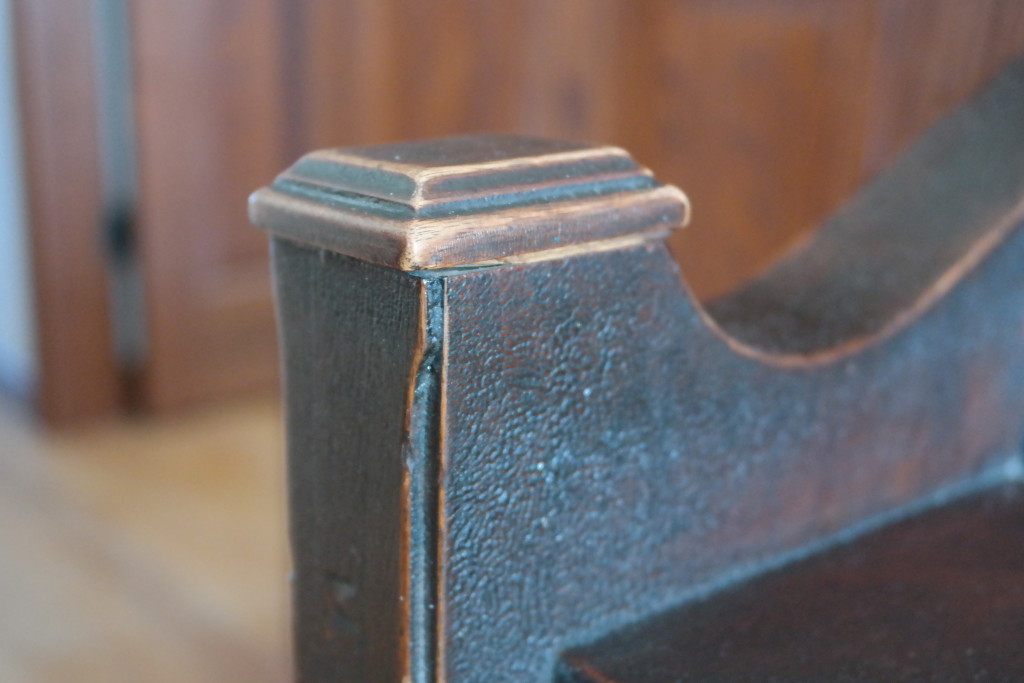 But this piano is a big part of the history that ties me to both of them. I don’t know the whole story because I didn’t ask. And now I wonder. . .when did Grandma Joy fall in love with music? Who taught her to play the piano? If they talked about it, I wasn’t listening.

The Piano and Grandma

Her older half-brother, Clarence Amondson, bought the upright for her in 1920 when she was  thirteen years old. 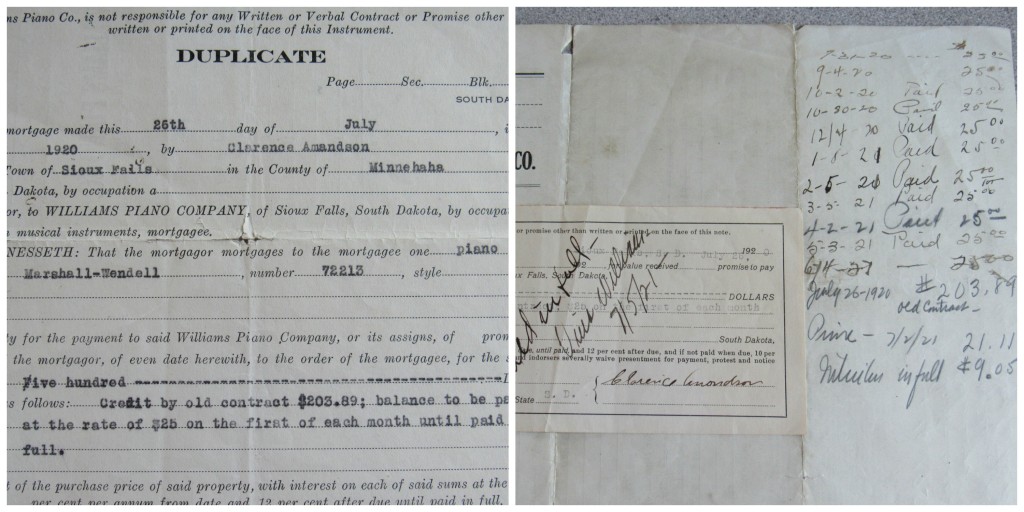 The piano came from Albany, New York, to Sioux Falls, SD, and then to her in Marshall, ND, on the train. 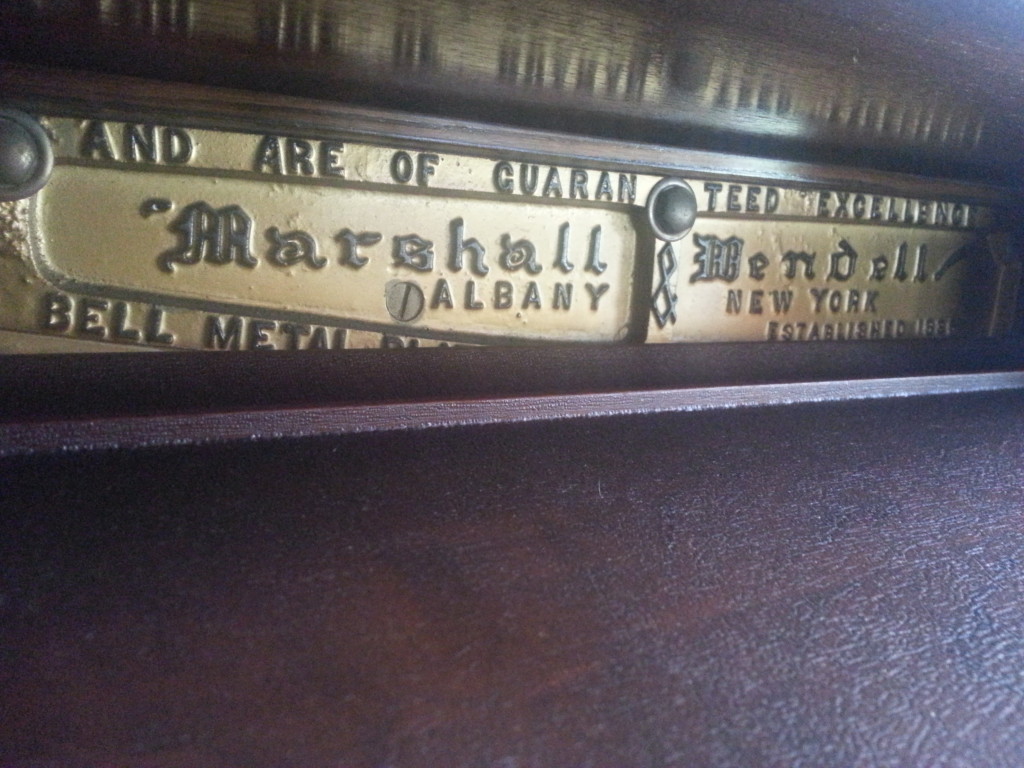 The man she called Pa, picked it up at the depot. He owned and operated the dray line. 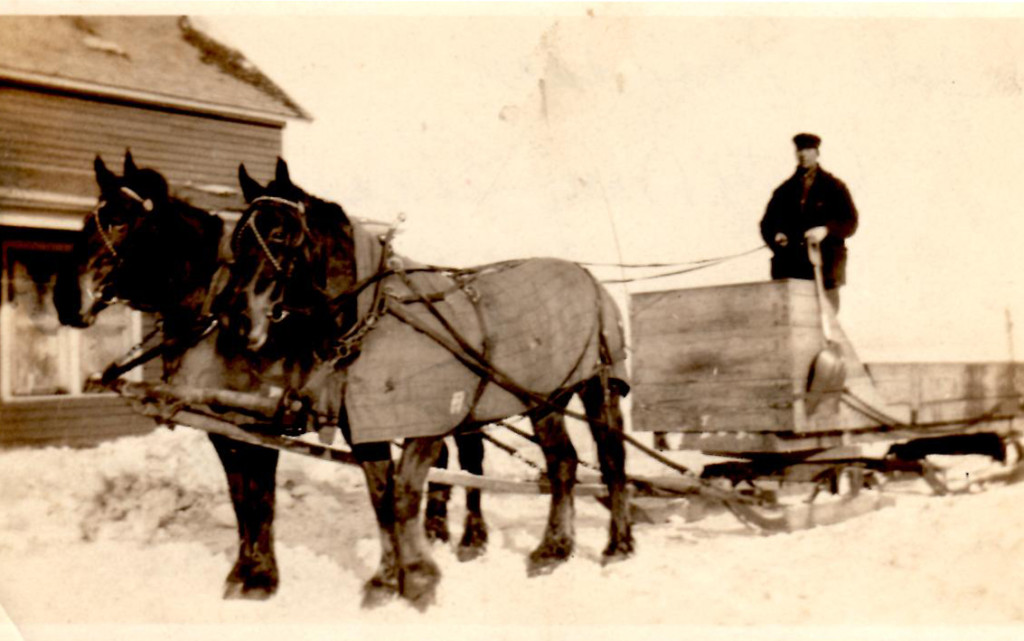 The back of this picture says in my great-grandma’s handwriting, “John going to work. 1917.”

For as long as I can remember, Grandma played and sang on the radio, for church services, and at the local mission. If someone called, she went because both were her calling and her profession. And there was that one time she played a duet on the accordion with the guy from the Lawrence Welk show, Myron Floren. To her, the accordion was like holding a piano in your arms.

When Grandma put her hands on the keys, she let herself fall into the music and she played with passion and at times gusto. I loved watching her and wanted to be like her – just not on the piano. I wanted my own passion. 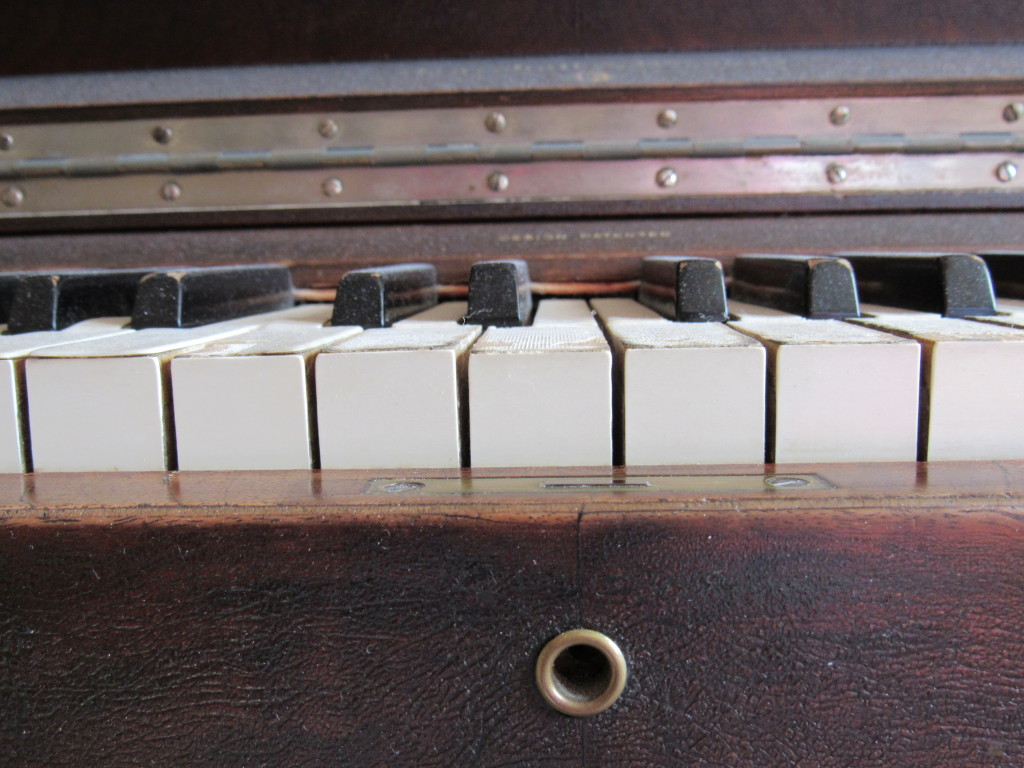 When I stayed with her, we visited the nursing homes and we stopped in every room. She invited folks to come and listen. Those who couldn’t join us, got a greeting, a touch, and sometimes a prayer. She sometimes sang a few lines acapella for someone she knew well. I didn’t play or sing with her as my mama had – I was in charge of the flannel graph so the folks who couldn’t hear, but could see followed along that way. I opened hymnals and smiled a lot. She assured me I was using my talents. The ladies and gentlemen smiled and hugged me and clapped for her.

That’s when I learned there are different kinds of applause.

Grandma had an entrepreneurial spirit and a sick husband who needed her care, so she became a piano teacher in her home. When she could, she still played and sang in church. I sat next to the piano in a chair in her living room and the pews at her church and watched. Loving her and loving the way she did what she did best. I was so proud of her.

I thought Grandma was born knowing how to make music on these keys and using these pedals. That’s silly of course, but the piano was part of her. I couldn’t imagine her without it.

Then I came home from school one day and it was in our dining room. My heart broke for her. My stomach hurt and I cried and I dusted it every week with a heart full of love for her. When she visited us, she played with increased passion. 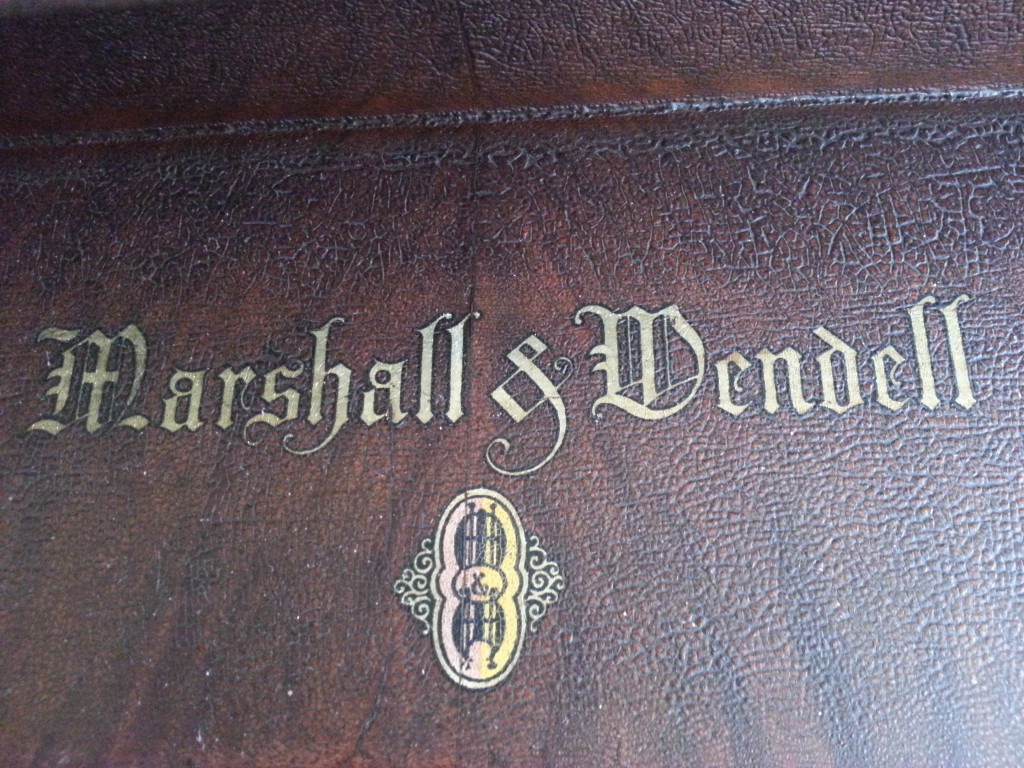 To get me started on my musical journey, Grandma and Grandpa gave me an electric organ for my third birthday. It was just the right size. And to me, it was just a toy. 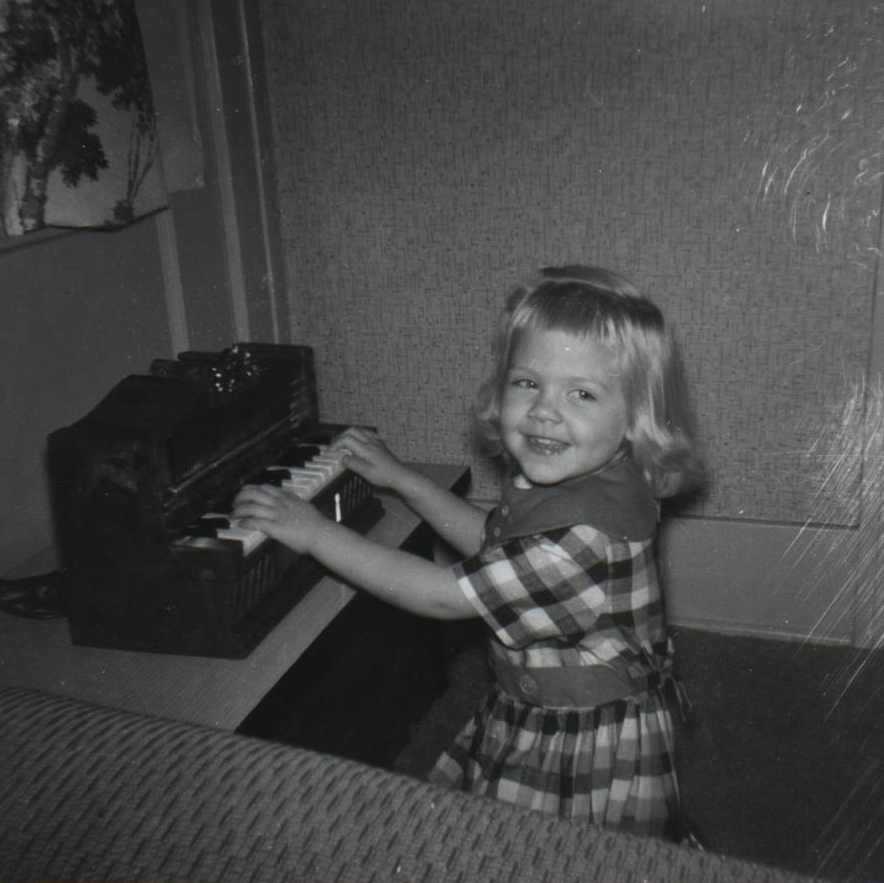 One spring, when I was six or seven, Grandma came to Rochester and we visited a piano studio. She thought that she’d failed as my teacher, so she hired them. At home, took on more students of her own to pay for the lessons. She would do this three times in my life.

Still believing it was possible, my parents bought me a piano I could practice on and play at home. There is no picture of me with this instrument. It was like the second my bottom hit the bench I was in the wrong place. 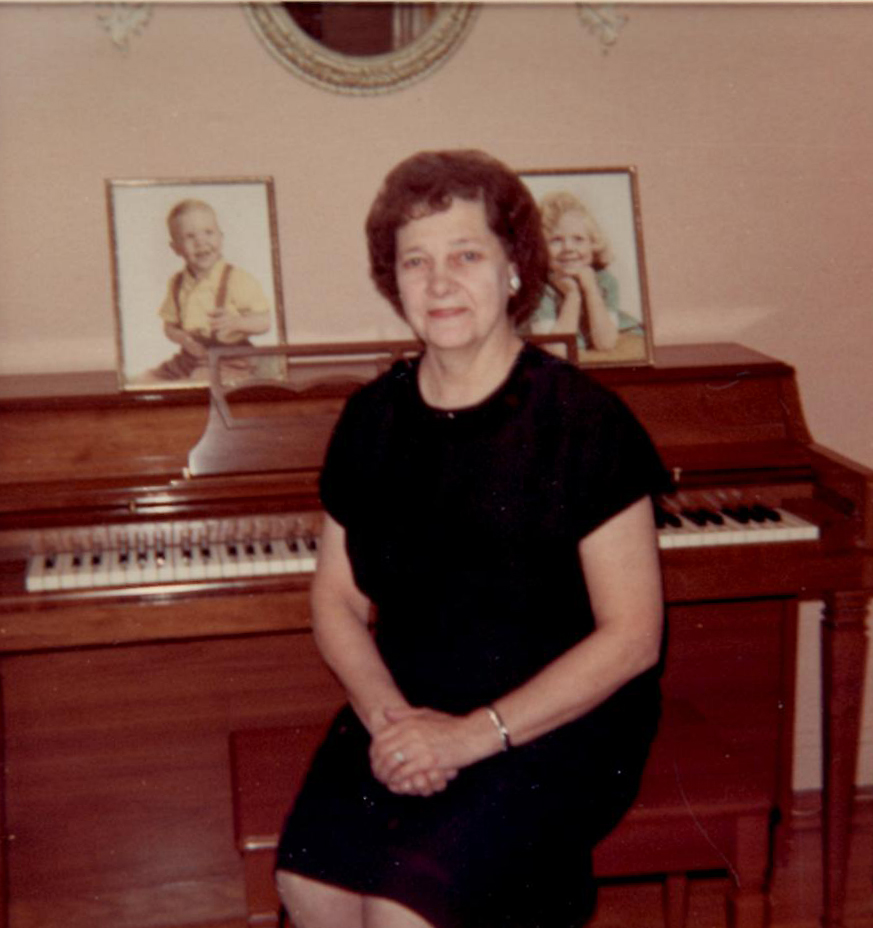 They thought I’d love learning to play and would enjoy practice. Because when I really wanted to learn something, I poured myself into it – even as a little girl.  After being told I was too young to read and write, I taught myself to do both. I was four. And tenacious. Mama was clear about this.

I loved the way the keys looked, and the shapes and placement of the notes on the lines in my piano books fascinated me. They looked like a beautiful language which they are. One I didn’t understand and didn’t want to. Because I loved another language more. Words. They were the way I wanted to make music in the hearts of readers. My daydreams were full of letters and I yearned for keys under my fingers. Typewriter keys. 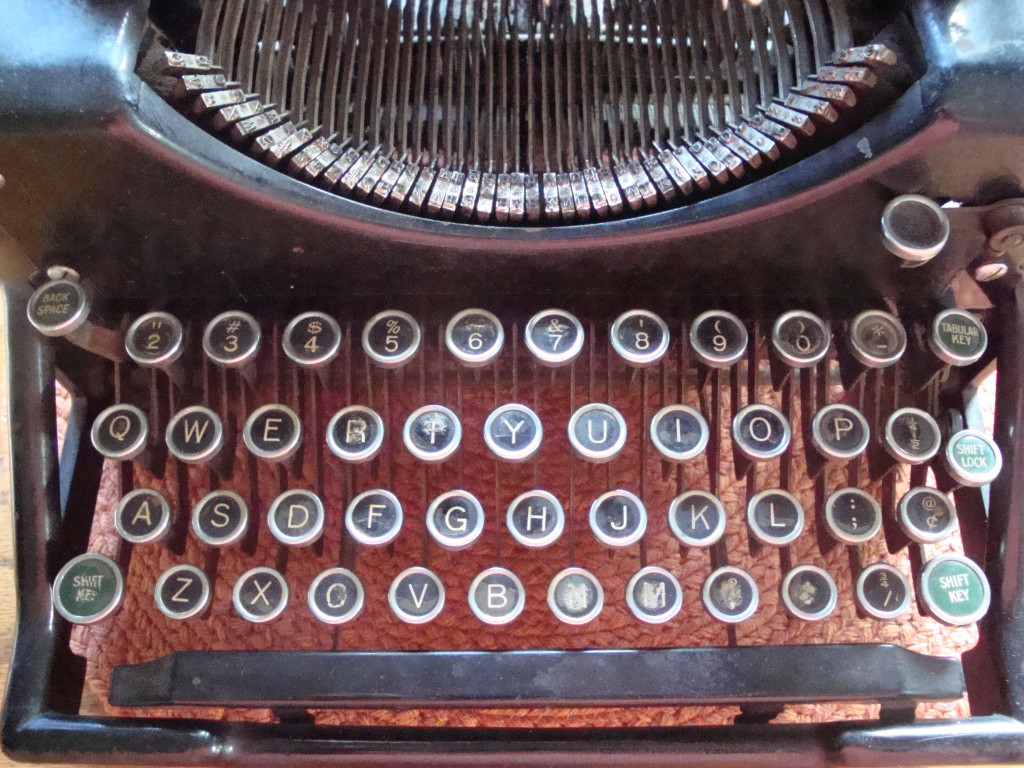 And the pedals? Well, they made me want to drive because I loved my bike pedals and could hardly wait to drive a car. I got messing around at her piano one day with an imaginary steering wheel in my hands and my feet working the pedals like a race car driver. I got a little lost in the fantasy. Oh, my. 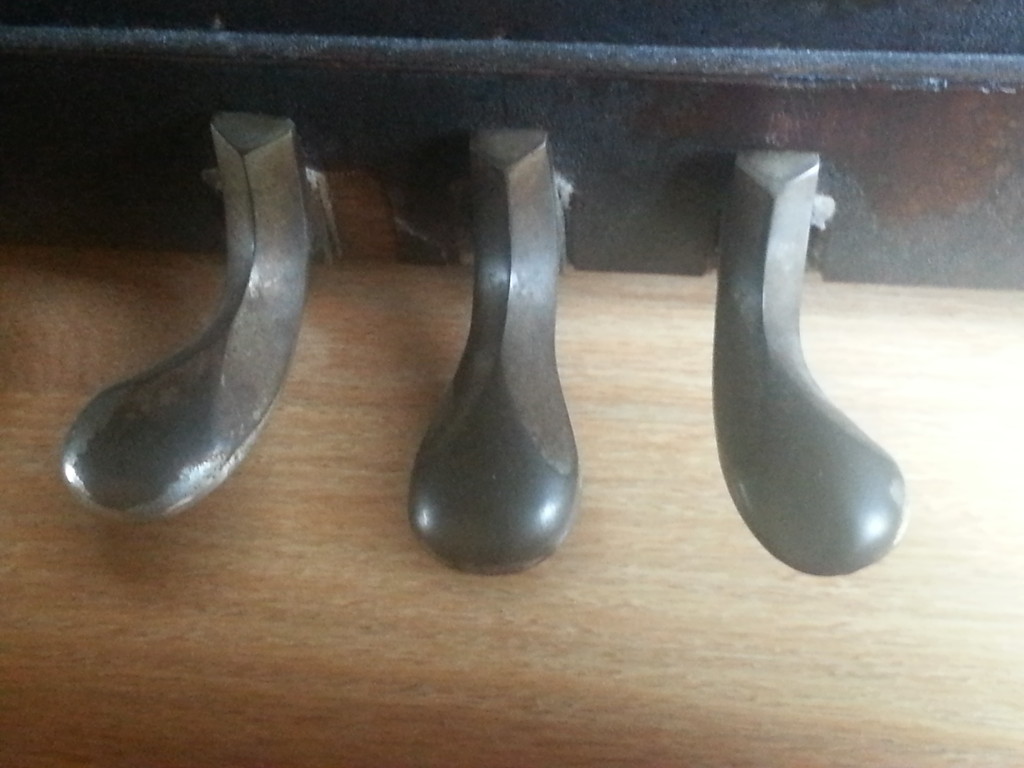 But this piano? I love it. It’s where Grandma Joy played the old hymns and back in the day newer ones like The King is Coming and Because He Lives. It’s where I sat beside her because I loved her. 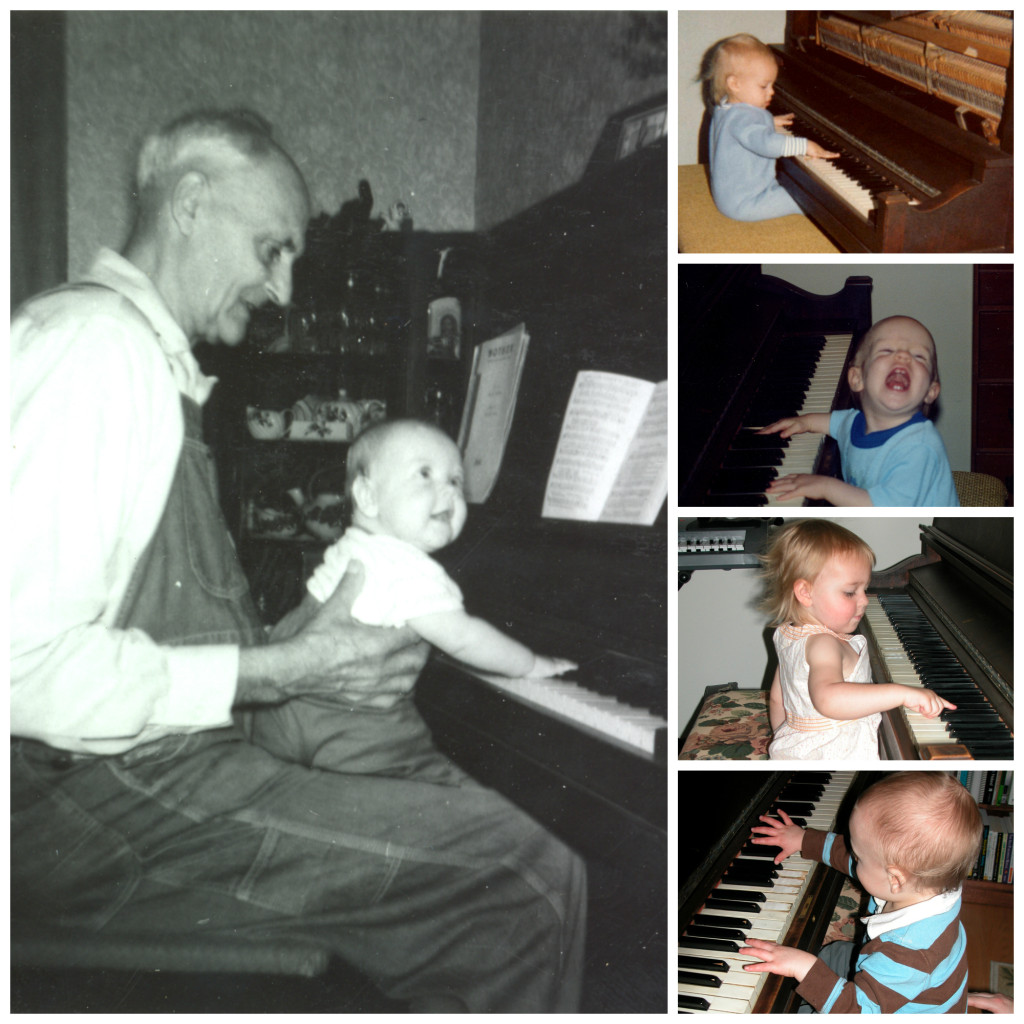 Five generations of hands have touched these keys. The first two made music. The rest of us made noise.

I knew it was always going to be my piano. She said so. Mama said so. It’s now in our guest room where it reminds me of their hands reaching across octaves and their talent. Most of all, I remember their love for me and the way they gave up their dreams for me and asked Daddy to buy me a typewriter. 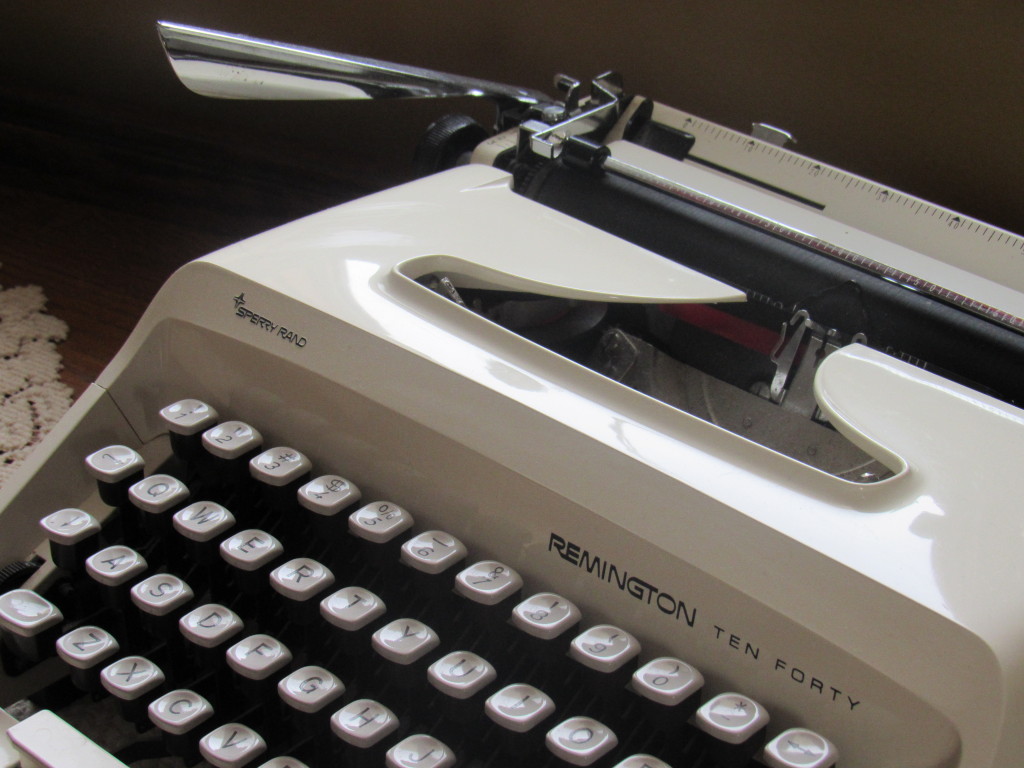 My music books still reside in the bench. I get them out now and then. I didn’t make it very far.

But sometimes, when I am lonely for Grandma and Mama, and the way we were together . . . 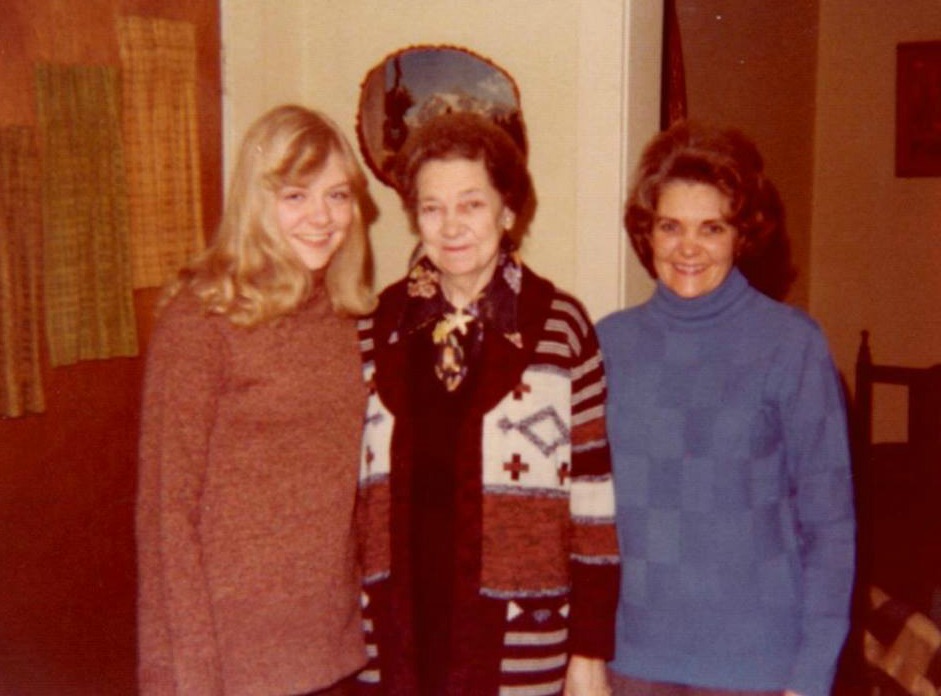 . . . I go to the piano where I practice my scales and am trying to learn to play The King is Coming and Because He Lives on the worn keys. I do it badly, but for some reason, now I love my time spent on the bench. 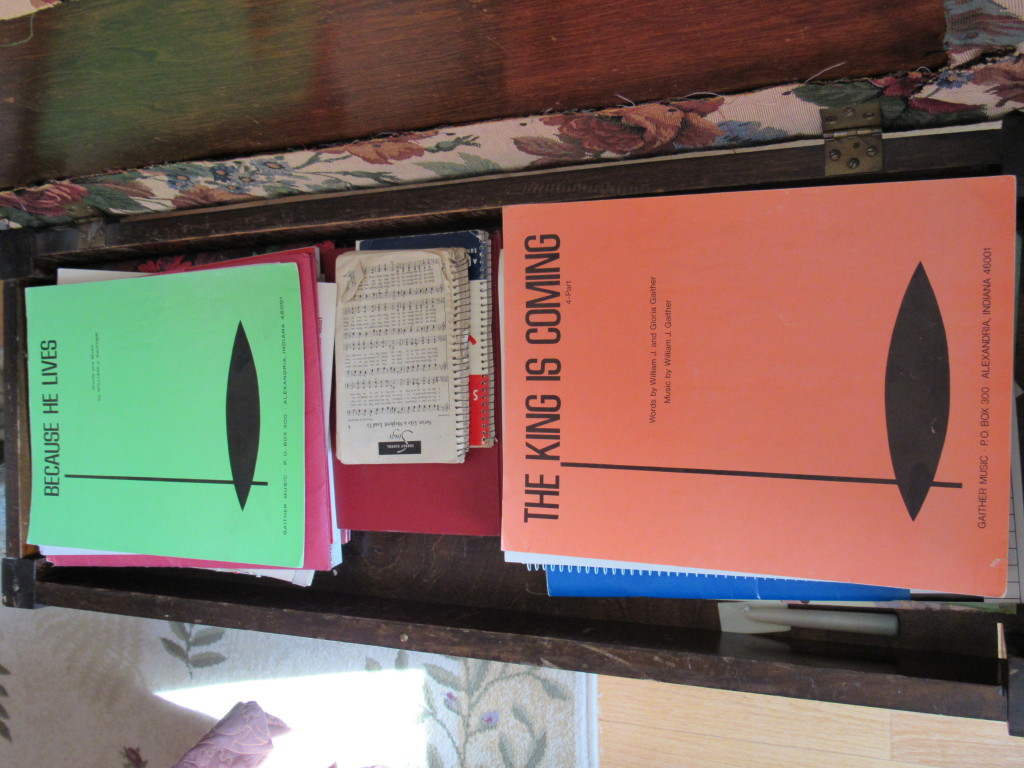 I still don’t get the language and it’s hard for me – I have very little sense of beat, even with a metronome. I don’t even know how to set that right!

It needs to be tuned, and I hit the wrong keys a lot so the dogs don’t follow me in there choosing instead to nap in the living room where it’s quieter. They’re smart that way.

I love this old piano. It’s scarred, heavy, and old. And it’s more than a sentimental piece of furniture. It’s part of who they were  and it’s a piece of their legacy to me.

I don’t regret not loving to play the piano as a kid. That talent and purpose weren’t placed in my heart by the Creator. But now when I put my fingers on the keys, I’m making noise in a grateful way.

The Piano. A #Legacy #Story